Carter shared his “Community Protection in Sports Act” first with Fox News and explained that the MLB should be on the hook to pay localities, vendors and businesses in the aftermath of the “purely political” decision to move the game out of Georgia because of the state’s new controversial voting law. 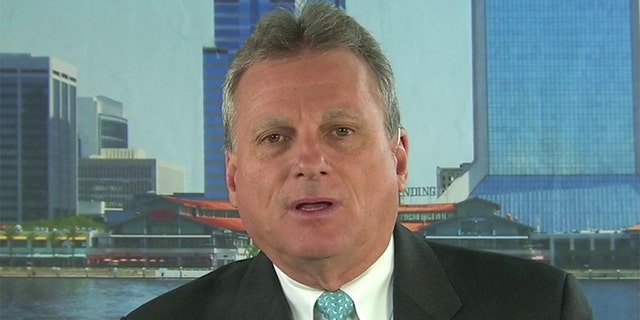 “Major League Baseball, unfortunately, has set an awful precedent by moving the All Star game out of the state of Georgia — out of Atlanta — and costing the state hundreds of millions of dollars and more importantly impacting small businesses and minority small businesses,” Carter told Fox News.

Carter said the MLB “should be held responsible financially for the impact that they are having.”

Carter’s legislation, which has long odds of passing in the Democrat-controlled Congress, would make it unlawful for the MLB to cancel or relocate a major sporting event that is not part of the regular season unless it’s for a pandemic, natural disaster or other declared emergency situation. The legislation aims to hold the MLB financially responsible for making business decisions based on politics.

The legislation would set up a legal avenue for businesses and localities to file civil lawsuits against the MLB to seek damages for sales they lost because of the event’s sudden cancelation.

“Vendors and small businesses should have the right to seek reparations for what has happened to them,” Carter said.

MLB Commissioner Rob Manfred made the announcement on April 2 to strip the Atlanta Braves of the event in response to the mounting pressure to change the location of the July game in response to Republican-backed election reform legislation recently signed by Gov. Brian Kemp.

“Over the last week, we have engaged in thoughtful conversations with Clubs, former and current players, the Players Association, and the Players Alliance, among others, to listen to their views,” Manfred said in a statement.

“Major League Baseball fundamentally supports voting rights for all Americans and opposes restrictions to the ballot box,” he continued. “Fair access to voting continues to have our game’s unwavering support.”

MLB moved the game to Coors Field in Denver on July 13. 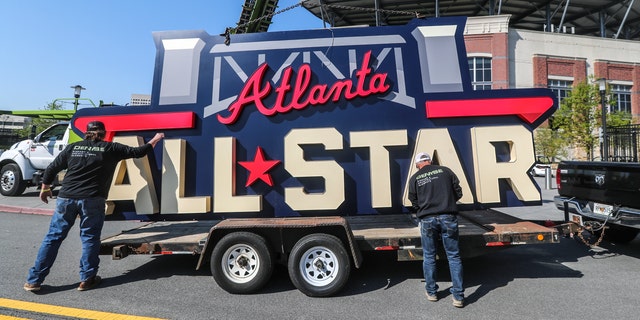 Workers load an All-Star sign onto a trailer after it was removed from Truist Park in Atlanta, Tuesday, April 6, 2021. Major League Baseball plans to relocate the All-Star Game to Coors Field in Denver after pulling this year’s Midsummer Classic from Atlanta over objections to sweeping changes to Georgia’s voting laws, according to a person familiar with the decision. The person spoke to The Associated Press on condition of anonymity Monday night, April 5, 2021, because MLB hadn’t announced the move yet. (John Spink/Atlanta Journal-Constitution via AP)
(AP)

After a record-breaking turnout that led to Democrats winning Georgia in the presidential race and two Senate seats, the GOP-led Georgia legislature passed the new voting rules that supporters say will add integrity to the election system, but Democrats fiercely opposed as voter suppression tactics.

The recently enacted Georgia law places new restrictions on voting by mail, adds voter ID requirements and establishes limits on the number of drop box locations and operating hours. It cuts down the time for absentee voting and does away with a signature-match system in favor of providing a driver’s license, state ID or the last four digits of their social security number on ballots to prove identity.

The law mandates two Saturdays of early voting ahead of general elections, an increase from just one, and says two Sundays are optional. The law also bans outside groups from handing out free food or water to those waiting in line to vote. But the law allows for “self-service water from an unattended receptacle.”

Carter said if MLB had fully understood the law, officials wouldn’t have moved the game because Georgia has much better access to the polls than other states, including New York where the MLB is headquartered.

“It’s just unbelievable that these intelligent, competent people didn’t take time out to read the bill and instead base their decisions on the misinformation and lies being spread by Stacey Abrams, Joe Biden and Raphael Warnock,” Carter said, naming leading Democrats critical of the bill.