House Speaker nancy-pelosi” target=”_blank”>Nancy Pelosi< to the floor for a vote.

During her weekly press conference Thursday, Pelosi, D-Calif., would not commit to bringing that bill to the floor.

If passed, Biden would have the ability to add four justices, overcoming the high court’s present 6-3 conservative majority.

Some Democrats have called for the expansion of the Supreme Court after former President Trump had three nominees confirmed during his presidency, while decrying some of the court’s rulings, and accusing justices of being biased toward Republicans and conservatives.

But court packing is not filling empty seats on the Supreme Court, as Jones says. It instead means adding seats to the Supreme Court in order to change the results of its rulings. The term was first coined when it was unsuccessfully attempted by former President Franklin Delano Roosevelt.

The legislation, though, is highly unlikely to pass. 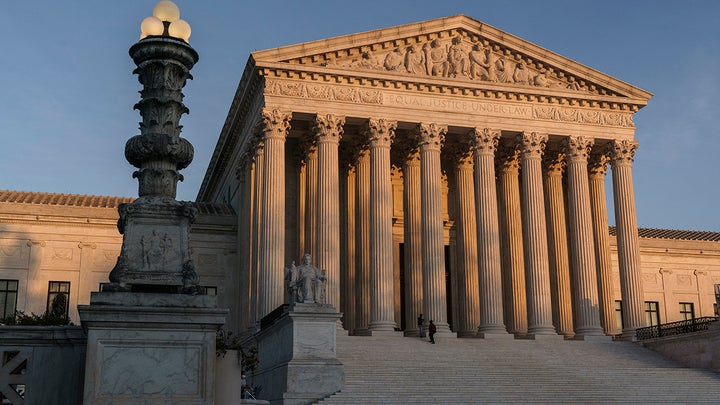 Democrats can only lose two votes in the House and still be able to pass a bill. And in the Senate, they would need to get rid of the legislative filibuster to pass their court-packing bill. Democratic Sens. Joe Manchin and Kyrsten Sinema have said they will not do that. Manchin also previously said he opposes court packing.

Republicans, though, slammed the bill, calling it an “assault” on judicial independence, but predicted the move would prove unpopular and ultimately help Republicans in the 2022 midterm elections.

“Democrats are launching a full assault on the independence of the federal judiciary. Republicans will stop them,” Rep. Ken Buck, R-Colo., said in a tweet.

“This is such a fantastic gift to the NRSC,” added Matt Whitlock, a former staffer at the National Republican Senatorial Committee (NRSC). “And making it a bill instead of a Senate rules process means we get to get moderate House D’s on the record on it too. Just a fantastic turn of events.”

Meanwhile, Biden, last week, issued an executive order to form a commission to study reforms to the Supreme Court.

The 36-member commission will be bipartisan and will hold public meetings to evaluate court reforms. The new panel will have 180 days from the first meeting to complete its report on the pros and cons of court reforms.

While court packing – or expanding the number of justices beyond nine – has been the most high-profile court reform debated, Biden’s executive order seeks to look at other judicial changes, including the lifetime appointment of justices.

According to the White House, the commission will look into “the length of service and turnover of justices on the Court; the membership and size of the Court; and the Court’s case selection, rules, and practices.”

Biden has been cool to the idea of court packing in the past, calling it a “bonehead idea” back in 1983 and said during the presidential campaign that he’s “not a fan of court packing.”