A shocking video released Wednesday shows a smuggler dropping a 2-year-old migrant to their father from the top of an 18-foot-high border wall structure — the latest crisis-era video of children being dropped or abandoned at the border by smugglers.

The video was tweeted out by San Diego Border Patrol Chief Agent Aaron Heitke, who said the incident happened Sunday and that the minor was not injured. 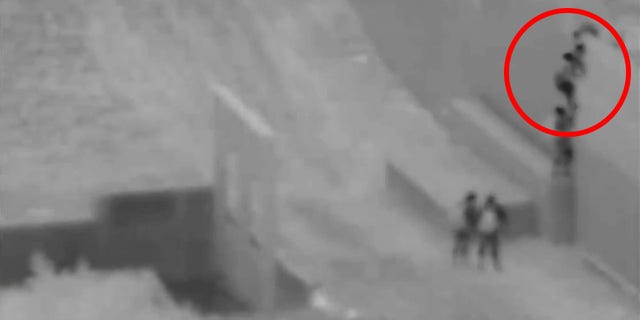 Shocking video shows a smuggler dropping a 2-year-old migrant to their father from the top of an 18-foot high border wall structure.
(USBPChiefSDC/Twitter)

“Sunday, #BorderPatrol agents witnessed a smuggler drop a two-year-old child from atop the 18-foot-high border wall into the arms of the child’s father. This event could have been catastrophic,” he said. “Luckily, the child was not injured.”

It is the latest shocking image to emerge during the ongoing border crisis, which has overwhelmed officials south of the border and led to harrowing scenes involving children.

Last month, Border Patrol released video of smugglers abandoning a 5-year-old girl and a 3-year-old girl at the border in the New Mexico desert in the middle of the night after dropping them from over a 14-foot border barrier. The kids were rescued by Border Patrol.

This month, Border Patrol agents rescued a 5-year-old and 6-year-old found alone and crying after they were abandoned by a couple who hoisted them over boulders near the end of the border wall.

The children had their mother’s name and phone number on a note and their forearms — which agents used to get additional information.

Agents told Fox News that smugglers dump unaccompanied children in one area of the border to distract and overwhelm agents so they can sneak adults through another part of the border.