In her “Final Thoughts” commentary on Wednesday, Fox Nation host Tomi Lahren said rhetoric from joe-biden” target=”_blank”>President Biden<, D-Calif., and other prominent figures appeared to minimize the unrest that might have occurred if ex-Minneapolis Police Officer Derek Chauvin had been acquitted in the murder of george-floyd” target=”_blank”>George Floyd< to join protesters in Brooklyn Center, Minn.

“We’re looking for a guilty verdict… If nothing does not happen, then we know that we got to not only stay in the street, but we have got to fight for justice,” she said in comments captured on video.

Biden had said he was “praying the verdict is the right verdict,” and in a White House statement said Floyd’s murder “launched a summer of protest we hadn’t seen since the Civil Rights era in the 1960s — protests that unified people of every race and generation in peace and with purpose to say, ‘Enough… of the senseless killings’.”

In the president’s case, he clarified that he publicized his opinion after the jury had been sequestered.

On Fox Nation, Lahren asked whether the jurors in the case made their “guilty” verdict following a 10-hour deliberation based on merit.

“Did the jurors make this decision based on the merits of the case presented by both sides? Did they make their decision beyond a reasonable doubt, without tampering, intimidation and fear of backlash? I sure hope and pray so because this conglomeration of meddling, outspoken and overstepping so-called leaders did their best to set up the assist for the prosecution,” she said. 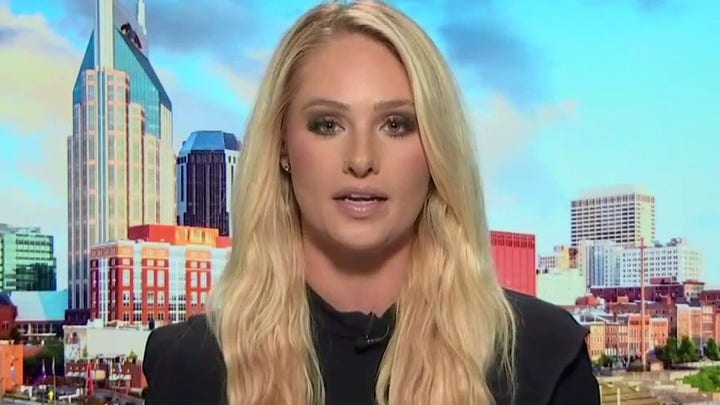 “It was disrespectful and disgraceful to this process, the taxpayer dollars that funded it, and the justice system as a whole,” Lahren said of politicians potentially interfering in the process.

“They were essentially telling rioters, thugs and anarchists they had a congressional and even PRESIDENTIAL pass to go buck wild if it didn’t turn out the way they wanted it to.”

She noted that Hennepin County Judge Peter Cahill admonished Waters for her comments during the trial, and in Lahren’s words “pleaded for those Democrats to keep their mouths shut.”

“Maxine’s blowhard opinion along with Ilhan Omar and even President Biden shouldn’t matter much, but did it?” she asked. “Was the jury faced with making a decision based on facts presented or did they feel the weight of the country’s emotional outrage was on their shoulders — that if BLM and others didn’t get what they wanted, the city and country would burn again?”

“We don’t know and may never know.”

Lahren added that her analysis has nothing to do with whether Chauvin should or should not have been found guilty in Floyd’s death, but whether Waters, Biden and people like Rep. Ilhan Omar, who represents the area where Floyd was killed, should have publicly injected themselves into the debate.

On Tuesday, prior to the verdict, Omar claimed Chauvin’s trial was a “closed case” and that an acquittal or insufficient conviction “shouldn’t really be a question.”

“After a months-long riot season that expanded far beyond the city of Minneapolis and the state of Minnesota, obscene and ludicrous cries and even moves to Defund the Police, a 3-week trial, more flames, more looting, more vandalism, destruction and lawlessness,” Lahren later said.

“There are bad apples in the police force and what happened to George Floyd is indeed a tragedy just as it is a tragedy in all instances a life is lost. But … if BLM, if Democrats, loudmouthed leaders, athletes, celebrities and civilians cared about Black lives, they would stop glorifying those who resist arrest and stop looking at non-compliance as a badge of honor. It’s not.”

Fox Nation programs are viewable on-demand and from your mobile device app, but only for Fox Nation subscribers. Go to Fox Nation to watch the extensive library from Tomi Lahren, Pete Hegseth, Abby Hornacek, Laura Ingraham, Ainsley Earhardt, Greg Gutfeld, and many more of your favorite Fox News personalities.