chicago” target=”_blank”>Chicago< to his chest, according to the Cook County Medical Examiner’s Office. Officers responded to an area on Chicago’s West Side after learning that gunshots were detected by police-operated technology. Toledo and a 21-year-old man fled on foot when confronted by police and an officer shot the teen once, authorities said. The department described it as an armed confrontation.

A handgun the teen was carrying was recovered at the scene, police said. Prosecutors allege that Toledo had gun residue on his hand.

CHICAGO POLICE CANCEL OFFICER DAYS OFF AMID ‘EVENTS ACROSS THE COUNTRY’

The police accountability board initially said it was legally prohibited from releasing video of the shooting because the teen was a minor, but that changed after Chicago Mayor Lori Lightfoot and Police Superintendent David Brown called for the video’s release.

Lightfoot on Wednesday said she had viewed the police body camera videos. She declined to comment on the videos or describe them.

“I want to be respectful of family, but I do also think a police-involved shooting, particularly under these circumstances, it’s important for us to be transparent,” the mayor said, according to FOX 32 of Chicago.

On Tuesday, COPA said in a statement that it provided the Toledo family an opportunity to view the video from the March 29 shooting and “at the request of the family” will “not immediately release video and other materials as the family continues to grieve their loss.”

CHICAGO PROSECUTORS ALLEGE ADAM TOLEDO, 13, HAD A GUN WHEN HE WAS SHOT BY POLICE: REPORTS

COPA said in a statement Wednesday that the video and other materials would be released Thursday.

“COPA has remained sensitive to the family’s grief and is carrying out this release in accordance with the City’s Video Release Policy,” COPA said in a statement.

The footage has been widely anticipated in the city after other videos of violent police encounters around the country sparked civil unrest. The family praised the community for non-violent protests a day after they viewed video of the fatal police shooting. 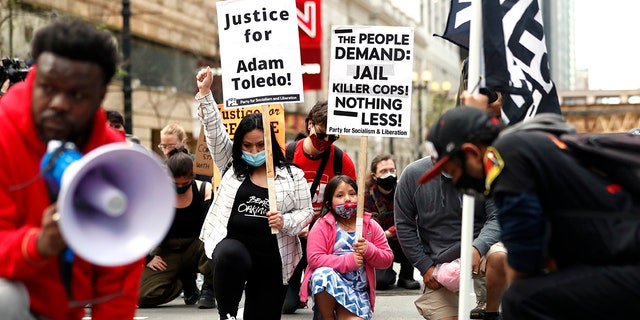 Abigail Garcia, 7, right, takes a knee with her mother Judith Garcia and other protestors during a peaceful protest on Tuesday, April 13, 2021, in downtown Chicago, demanding justice for Daunte Wright and Adam Toledo, who were shot dead by police. (AP Photo/Shafkat Anowar)

“We appreciate the community support and are grateful that events so far have remained peaceful,” the family said in a statement issued Wednesday by their attorneys.

Police said the other person who fled from police officers, Ruben Roman Jr. was arrested on a misdemeanor count of resisting arrest.