At a recent united-nations” target=”_blank”>United Nations<, world-regions, which leads a military coalition supported by the internationally recognized Yemeni government, led the way with a donation of $430 million out of a total of $1.67 billion raised.

conflicts, which backs the Houthi militias fighting the Yemeni government, according to a public UN listing of the donations, didn’t offer any aid.

While the Biden administration gave $191 million at the conference, adding to the hundreds of millions already donated in U.S. humanitarian aid to the war-torn country, a recent policy change and intense diplomacy to get a ceasefire has so far failed.

Attacks against the Saudi-led coalition by the Houthis have only intensified in scale and ferocity.

The war began in 2014 when the Houthis laid siege to Yemen’s capital in an attempt to take over the country. In 2015, the Saudis led a coalition to fight off the militias. Since then, the humanitarian situation has worsened, leaving thousands of civilians dead and millions on the brink of starvation. 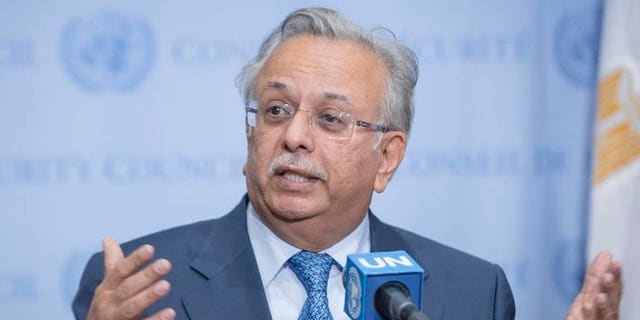 The ambassador noted the irony when it comes to Tehran’s destructive role in backing the Houthis.

“On the other hand, Iran is playing a destructive role in the region and is providing funding, weapons and other support to a wide range of terrorist and rebel groups, including the Houthi militia.

He warned that the attacks don’t just affect his country. “Ras Tanura is one of the world’s largest oil shipping ports and the Aramco complex in Dhahran houses workers and their families from all over the world.”

He noted that the attacks “against the Kingdom prove that these Iran-backed militias only believe in terrorist behavior to reach their narrow political aims. The Houthis continue to ignore and violate Security Council resolutions and international humanitarian law.”

The Biden administration re-set its policy last month by announcing an end in support for Saudi-led operations in Yemen.

Shortly after that, Secretary of State Blinken undid a Trump administration order by revoking the Foreign Terrorist Organization status of the Houthis, a decision he said was based on the dire humanitarian situation in the country, and the fear of the impact it could have on basic commodities such as food and fuel.

Al-Mouallimi told Fox News that he understood the reasons behind the de-listing, but stated, “Saudi Arabia will continue to treat Yemen’s Houthis as a terrorist organization despite the U.S. decision.”

During Friday’s State Department briefing, spokesman Ned Price pushed back against an Associated Press question on whether the de-listing had been a mistak. Price responded that “we are not going to make any apologies for doing all we can do to address the significant humanitarian plight of the people of Yemen.”

Price said the Trump administration’s last-minute move to add the Houthis to the terror list had only compounded the problems in the region.

But Varsha Koduvayur, a senior research analyst at the Foundation for Defense of Democracies (FDD), told Fox News that the Biden policy change “certainly contributed to emboldening the Houthis.”

“The spate of attacks has increased around the time of the administration’s de-listing of the Houthis,” the Persian Gulf region expert said.

“The big prize for the Houthis now is the military offensive on Marib – they have little incentive to change tactics, and the administration’s pullback in pressure, though designed to benefit Yemen’s humanitarian situation, has certainly fed into the Houthis’ incentive structure.”

Meanwhile, the U.S. special envoy for Yemen, Tim Lenderking, proposed a ceasefire that was shunned by the Houthis, who said the plan was only representing UN and Saudi views, according to Reuters.

Lenderking had spent about two weeks of diplomacy in the region pushing for the ceasefire.

As the Houthi offensive continues, Behnam Ben Taleblu, an Iran expert and senior fellow at FDD, warns that “Iran has sparked a revolution in Houthi long-range strike capabilities” that allows the militias to threaten Saudi oil assets and infrastructure.

Iran has been able to avoid detection due to its “evolving proliferation model (that) involves sending component parts rather than complete systems.”

Ben Taleblu said the Biden administration should be watching these developments closely.

“Increased strikes by the Houthis convey one message: that the rebels are confidant more material is on the way and will not be interdicted. Washington should prove them wrong,”

Fox News’ Adam Shaw contributed to this report, as well as The Associated Press.