INDIANAPOLIS — Members of Indianapolis’ tight-knit Sikh community joined with city officials to call for gun reforms Saturday as they mourned the deaths of four Sikhs who were among the eight people killed in a mass shooting at a FedEx warehouse.

At a vigil attended by more than 200 at an Indianapolis park Saturday evening, Aasees Kaur, who represented the Sikh Coalition, spoke out alongside the city’s mayor and other elected officials to demand action that would prevent such attacks from happening again.

“We must support one another, not just in grief, but in calling our policymakers and elected officials to make meaningful change,” Kaur said. “The time to act is not later, but now. We are far too many tragedies, too late, in doing so.”

The attack was another blow to the Asian American community a month after authorities said six people of Asian descent were killed by a gunman in the Atlanta area and amid ongoing attacks against Asian Americans during the coronavirus pandemic.

About 90% of the workers at the FedEx warehouse near the Indianapolis International Airport are members of the local Sikh community, police said Friday.

Kiran Deol, who attended the vigil in support of family members affected by the shooting, said loopholes in the law that make it easier for individuals to buy guns “need to be closed now,” and emphasized that anyone who tries to buy a firearm should be required to have their background checked. 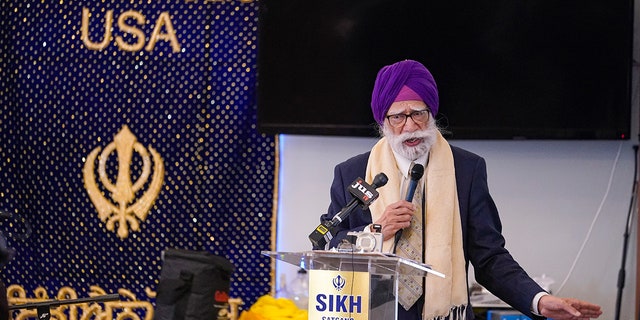 K.P. Singh speaks to members of the Sikh Coalition as they gather at the Sikh Satsang of Indianapolis in Indianapolis, Saturday, April 17, 2021. (Associated Press)

“The gun violence is unacceptable. Look at what’s happened … it needs to be stopped,” Deol said. “We need more reform. We need gun laws to be harder, stronger, so that responsible people are the ones that have guns. That’s what we want to bring awareness to.”

“While we don’t yet know the motive of the shooter, he targeted a facility known to be heavily populated by Sikh employees,” Kaur said.

There are between 8,000 and 10,000 Sikh Americans in Indiana, according to the coalition. Members of the religion, which began in India in the 15th century, began settling in Indiana more than 50 years ago.

One of the victims of Thursday night’s shooting was Amarjit Sekhon, a 48-year-old Sikh mother of two sons who was the breadwinner of her family.

Kuldip Sekhon said his sister-in-law began working at the FedEx facility in November and was a dedicated worker whose husband was disabled.

“She was a workaholic, she always was working, working,” he said. “She would never sit still … the other day she had the (COVID-19) shot and she was really sick, but she still went to work.”

Kuldip Sekhon said his family lost another relative in the shooting — Kaur, who was his son’s mother-in-law. He said both Kaur and Amarjit Sekhon both began working at the FedEx facility last year.

“We were planning to have a birthday party tonight, but now we’re here instead. This … this is tough for us,” Sukhpreet Rai, who is also related to Kaur and Sehkon, said Saturday. “They were both very charming.”

Komal Chohan, who said Amarjeet Johal was her grandmother, said in a statement issued by the Sikh Coalition that her family members, including several who work at the FedEx warehouse, are “traumatized” by the killings.

“My nani, my family, and our families should not feel unsafe at work, at their place of worship, or anywhere. Enough is enough — our community has been through enough trauma,” she said in the statement.

The coalition says about 500,000 Sikhs live in the U.S. Many practicing Sikhs are visually distinguishable by their articles of faith, which include the unshorn hair and turban.

The shooting is the deadliest incident of violence collectively in the Sikh community in the U.S. since 2012, when a white supremacist burst into a Sikh temple in Wisconsin and shot 10 people, killing seven.

In Indianapolis, police said Brandon Scott Hole, 19, a former worker at the FedEx facility killed eight people there before killing himself. Authorities have not released a motive.

Hole was in possession of two assault rifles, which he purchased legally in July and September of 2020, according to the Bureau of Alcohol, Tobacco and Firearms. Police said Hole was witnessed using both rifles during the assault.

Hole’s family said in a statement Saturday they are “so sorry for the pain and hurt” his actions caused.

Paul Keenan, special agent in charge of the FBI’s Indianapolis field office, said Friday that agents questioned Hole last year after his mother called police to say that her son might commit “suicide by cop.” He said agents found no evidence of a crime and that they did not identify Hole as espousing a racially motivated ideology.

Samaria Blackwell, of Indianapolis, was a soccer and basketball player who last year graduated from Indy Genesis, a Christian competitive sports organization for homeschooled students. Her parents said Saturday in a statement that she was an outgoing “people person” who will be missed “immensely” by them and her dog, Jasper.

“As an intelligent, straight A student, Samaria could have done anything she chose to put her mind to, and because she loved helping people, she dreamed of becoming a police officer. Although that dream has been cut short, we believe that right now she is rejoicing in heaven with her Savior,” they said.

Matthew Alexander, of Avon, just west of Indianapolis, was a former Butler University student and a 2007 graduate of Avon High School. Relatives and several of his former teammates on Avon’s baseball team attended a game Saturday in his memory. They carried his former uniform, No. 16, onto the field, where they hugged and cried.

Albert Ashcraft, a former FedEx driver, said Alexander dispatched drivers to locations for deliveries, prepared their paperwork and was well-liked because he looked out for the drivers, even making sure they got treats.

“People would bring doughnuts in and he was always sticking doughnuts back for his drivers,” he told The Indianapolis Star.

Associated Press reporters Michael Balsamo in Washington and Pat Eaton-Robb in Connecticut contributed to this report. Casey Smith is a corps member for the Associated Press/Report for America Statehouse News Initiative. Report for America is a nonprofit national service program that places journalists in local newsrooms to report on undercovered issues.