Man uses 5 engagement rings to propose to his girlfriend

A man recently proposed to his relationships” target=”_blank”>girlfriend< ring, he gave her five to choose from.

William Hunn proposed to his girlfriend, Brittney Miller, after a helicopter ride last week, according to their social media accounts.

On Instagram, Miller posted a picture of Hunn down on one knee, holding a display with the five rings — which had diamonds with various cuts and settingsa> — for Miller to choose from. <

Miller captioned the photo: “I SAID YES!!!! He proposed with not just one…. but FIVE rings. I had options.”

“@ichillwillfixit went above and beyond to make this day one that we’ll never forget,” Miller added. “William, you are truly a blessing. You’re my best friend, fiancé, soon to be husband and I can’t wait to spend the rest of my life with you.”

MAN ARRESTED FOR JET SKIING ACROSS IRISH SEA BREAKS UP WITH GIRLFRIEND WHO INSPIRED THE TRIP: REPORT

Hunn also posted about his proposal on Instagram, including a picture of Miller’s choice, which appears to be a rectangular-cut stone with a pavé band, People reported. 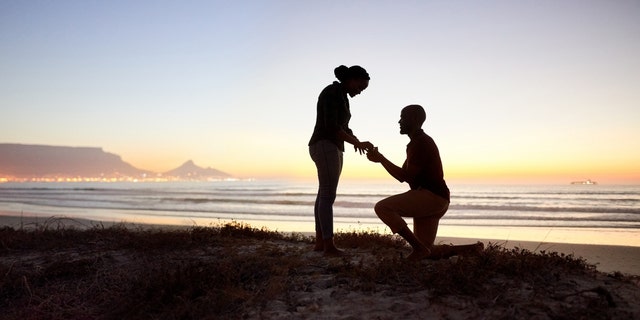 A man proposed to his girlfriend with five engagement rings so she would be able to pick her favorite.
(iStock)

Photos from the proposal were also posted on Twitter by photographer James D. Love, who wrote: “Just know… She had options on how she wanted to say ‘yes.’”

The couple’s story was even picked up by CBS This Morning’s Gayle King. Miller posted the clip on her Instagram account on Monday.

“I can’t believe The CBS Morning show covered my and @ichillwillfixit proposal!!!” Miller wrote on Instagram. “The amount of support we’ve received over the last week has been astronomical. This is truly amazing to have our story shared with so many people. And by GAYLE KING!?!? I’m speechless. Definitely a humbling experience.”

In the clip, King explained how Hunn proposed with five rings and that he even brought a diamond tester to the engagement.

“He gave her all those different choices and allowed her to choose,” King said, in part.

“I think that number one, it was very creative — as you see, we’re all talking about it — and the fact that he cared that much,” King added later. “And so, to me, it sounds like that marriage is off to a very good start.”