Christopher Begley, from Rogersville, us-regions, was fishing for catfish recently when he caught a huge lake sturgeon, according to a Facebook post from the Tennessee Wildlife Resources Agency.

“BIG FISH ALERT!” wildlife officials wrote on Facebook. “Wildlife Sgt. Brent Harrison sent this photo of angler Christopher Begley of Rogersville with a lake sturgeon he caught from the Horton Ford bridge on the Clinch Rivera> above Kyle’s Ford.”<

According to the post, Begley was using “cut suckers” for catfish bait. Instead, he reeled in the 61.5-inch (over 5 feet) sturgeon — with the help of his fiancée, Kathy Trent, officials wrote on Facebook.

Per Tennessee law, Begley released the sturgeon back into the river.

“Regional Fisheries Program Coordinator Bart Carter says the fish is nearly 30 years old and is from a restoration effort that began in 1992 when 3,200 lake sturgeon were released into the river,” the Tennessee Wildlife Resources Agency wrote.

According to the agency’s website, more than 220,000 lake sturgeon have been stocked in the upper parts of the Tennessee River and the Cumberland River since 2000. The primitive fish have dramatically declined and are considered endangered in Tennessee. 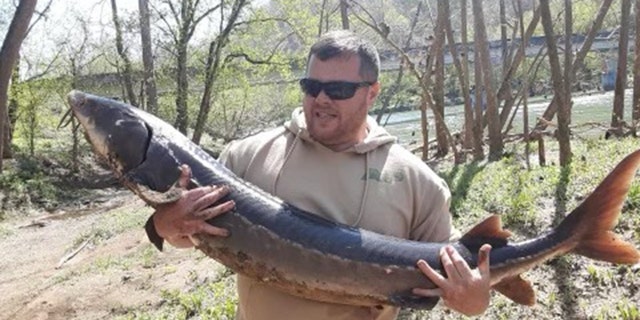 Lake sturgeon can grow up to eight feet in length and weigh up to 300 pounds, according to the website. Though 30 years is a long time for many other kinds of fish, lake sturgeon can actually live up to 150 years, making Begley’s catch quite young.