The technological backbone of these new advanced ships, which is now integrated on the first Flight III destroyer, the USS Jack Lucas, is a new family of AN/SPY-6 high-power, highly-sensitive, long-range radar systems that bring exponential improvements when it comes to threat tracking, identification and counterattack.

The AN/SPY-6 radar, previously called Air and Missile Defense Radar, is engineered to simultaneously locate and discriminate multiple tracks, and bring exponentially more tracking and detection. Built with a technical ability to detect incoming threat objects twice as far away and half the size of most existing radar, Raytheon’s SPY-6 enables ships to detect approaching enemy drones, helicopters and low-flying aircraft as well as incoming ballistic missiles … on a single integrated system.

In a tactical scenario, for instance, an enemy might seek to overwhelm ship defenses by coordinating multiple attacks simultaneously from technologies, anti-ship cruise missiles, fighter jets, and even surface ships. The new SPY-6 radar can give commanders a vastly increased ability to discern and counter multiple threats at one time, because the sensitive, multi-band radar will enable them to make faster and more informed decisions. Ship defenders will operate with much shorter and more efficient sensor-to-shooter time and can therefore optimize counterattack strategies.

“Threats maneuver differently, and the sooner you can verify what that object is and see it far away, you can figure out what weapon to use against it,” Scott Spence, director for Naval Radar Systems for Integrated Defense Systems, Raytheon, told Warrior in an interview. 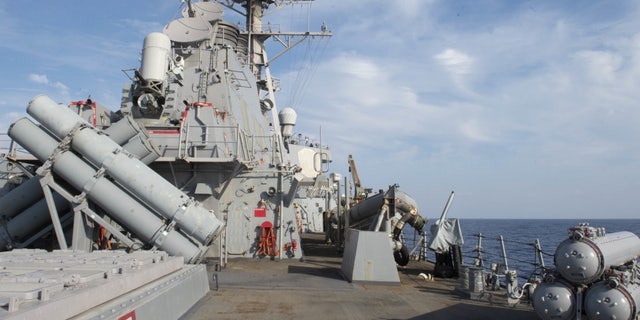 Radar works by sending a series of electro-magnetic signals or “pings” at the speed of light, which bounce off an object or threat and send back return-signal information identifying the shape, size, speed or distance of the object encountered. Analyzing the speed, frequency, range and variation of the return signals enable radar operators to develop a rendering or precise “picture” in a way of what a specific threat may be. More sensitive radar such as SPY-6 will therefore enable ships to detect smaller objects at greater distances and provide a higher degree of detailed information about objects, at times effectively distinguishing threats from one another or from non-threatening objects. There are at times different figures or metrics regarding the exact dimensions of the system’s sensitivity; one topics program manager once told Warrior that AMDR is 35 times more powerful than previous radar.

The SPY-6’s improved power density, output, and efficiency is made possible through a chemical compound semiconductor technology called Gallium Nitride, which can amplify high-power signals at microwave frequencies; it enables better detection of objects at greater distances when compared with existing commonly used materials such as Gallium Arsenide, Raytheon officials explained.