Rapunzel, Rapunzel, let down your long hair.a>< has chopped her mane for the first time in 12 years, donating the 6-foot ponytail to Ripley’s Believe it or Not.

18-year-old Nilanshi Patel from India has held the glossy Guinness World Record for longest hair on a teenager since 2018, having avoided the hair salon with a vengeance after a rough haircut at age 6, the record-keeper said. 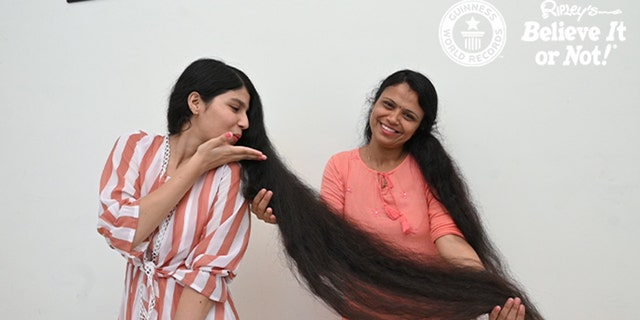 Nilanshi Patel and her mom Kaminiben before the big chop.
(Ripley’s)

ADORABLE DOGS FINALLY GET HAIRCUTS AS BUSINESSES REOPEN IN ENGLAND

Her dark hair grew and grew, measuring a whopping 6’6.7 inches when it was last officially measured in July 2020. During that time, Patel won three Guinness World Records titles for her marvelous mane. Ready for a change, Patel recently lobbed her locks and has donated her hair to Guinness World Records.

“My hair gave me a lot – because of my hair I am known as the ‘real life Rapunzel’… now it’s time to give it something back,” the Modasa, Gujarat teen said in a statement.

According to Guinness, Patel was split on what to do with her hair after the big chop, unsure whether to donate it to charity, auction it off, or give it to a museum. Untangling the options, her mom Kaminiben argued that her record-breaking mane belonged in a museum to inspire people and was “the right thing to do.” Thinking philanthropically, Kaminiben said she’d also cut her hair in solidarity with her daughter, and donate her long locks to charity in exchange.

On Wednesday, Guinness released footage of the highly anticipated haircut, in a clip viewed nearly a million times on YouTube.

“I’m so excited and a little bit nervous because I don’t know how I’m looking in the new hairstyle… so let’s see what happens, but I hope it’s going to be amazing,” Patel said before the chop.

Wincing and crossing her fingers as a stylist made the first cut, the teen was emotional as her first ponytail was handed to her.

“I can’t believe it, I’m so excited,” she exclaimed, kissing her hair and telling the ponytail “I love you.” 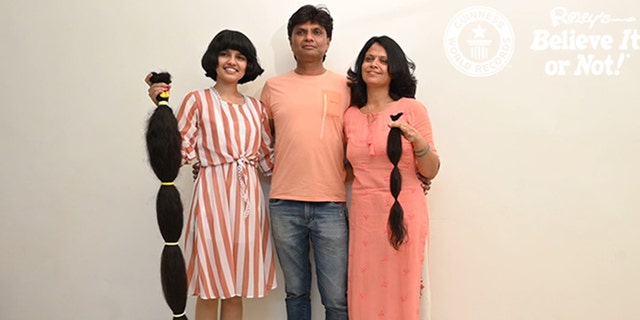 "My hair gave me a lot – because of my hair I am known as the ‘real life Rapunzel’… now it’s time to give it something back," the Modasa, Gujarat teen said in a statement.
(Ripley’s)

The stylist worked his magic with a little help from Kaminiben, and Patel was all smiles when her floor-length hair was finally cut into a cute bob.

“Oh my god it’s beautiful!” she gushed of the change. “It’s amazing – I’m like a little princess!”

“I love my new hairstyle. I feel proud that I’m going to send my hair to the U.S. museum,” Patel said. “People will see and be inspired by my hair. I’m really, really happy… Today is a new beginning and I hope I will break many more records in [the] future.”

Once it arrives stateside, the 9.4-pound ponytail will go on display at Ripley’s Believe it or Not! Hollywood, before moving to the Guinness World Records Museum.